WAS COLUMBUS THE 1ST TO DISCOVER AMERICA?

WAS COLUMBUS THE 1ST TO DISCOVER AMERICA ?

The Viking Explorer Who Beat Columbus to America

Nearly 500 years before the birth of Christopher Columbus, a band of European sailors left their homeland behind in search of a new world. Their high-prowed Viking ship sliced through the cobalt waters of the Atlantic Ocean as winds billowed the boat’s enormous single sail. After traversing unfamiliar waters, the Norsemen aboard the wooden ship spied a new land, dropped anchor and went ashore. Half a millennium before Columbus “discovered” America, those Viking feet may have been the first European ones to ever have touched North American soil.

The Vikings sought adventure and trading opportunities by using their maritime skills to push beyond the boundaries of European exploration.Lief Eriksson, who is believed to have been born in Iceland around A.D. 970, spent his formative years in desolate Greenland. Around A.D. 1000, Eriksson sailed east to his ancestral homeland of Norway.

A statue of Lief Erikson, the Viking thought to have sailed to the Americas 500 years before Columbus, guards the Hallgrímskirkja Church in Reykjavík, Iceland

Exploration was a family business for the expedition’s leader, Lief Eriksson. His father, Erik the Red, founded the first European settlement of Greenland after being expelled from Iceland around A.D. 985 for killing a neighbour. (Erik the Red’s father, himself, had been banished from Norway for committing manslaughter.) Eriksson, who is believed to have been born in Iceland around A.D. 970, spent his formative years in desolate Greenland.

Icelandic legends called sagas recounted Eriksson’s exploits in the New World around A.D. 1000. These Norse stories were spread by word of mouth before becoming recorded in the 12th and 13th centuries. Two sagas give differing accounts as to how Eriksson arrived in North America. According to the “Saga of Erik the Red,” Eriksson crossed the Atlantic by accident after sailing off course on his return voyage from Norway after his conversion to Christianity. The “Saga of the Greenlanders,” however, recounts that Eriksson’s voyage to North America was no fluke. Instead, the Viking explorer had heard of a strange land to the west from Icelandic trader Bjarni Herjolfsson, who more than a decade earlier had overshot Greenland and sailed by the shores of North America without setting foot upon it. Eriksson bought the trader’s ship, raised a crew of 35 men and retraced the route in reverse.

After crossing the Atlantic, the Vikings encountered a rocky, barren land in present-day Canada. Eriksson bestowed upon the land a name as boring as the surroundings—Helluland, Norwegian for “Stone Slab Land.” Researchers believe this location could possibly have been Baffin Island. The Norsemen then voyaged south to a timber-rich location they called Markland (Forestland), most likely in present-day Labrador, before finally setting up a base camp likely on the northern tip of the island of Newfoundland. 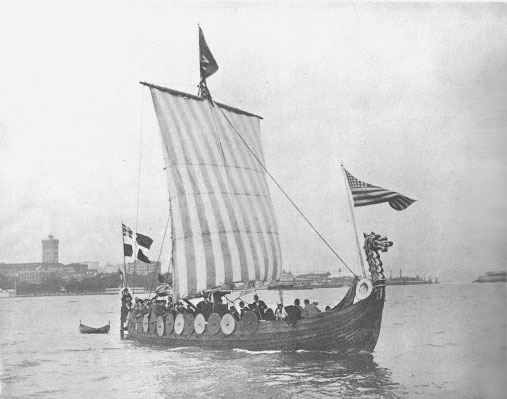 The Viking ship that sailed from Norway to the World's Columbian Exposition (World's Fair) in 1893.

The Vikings spent an entire winter there and benefitted from the milder weather compared to their homeland. They explored the surrounding region abounding with lush meadows, rivers teeming with salmon, and wild grapes so suitable for wine that Eriksson called the region Vinland (Wineland).

After spending the winter in Vinland, Eriksson and his crew sailed home to windswept Greenland with badly needed timber and plentiful portions of grapes. Eriksson, who would succeed Erik the Red as chief of the Greenland settlement after his father’s death, never returned to North America, but other Vikings continued to sail west to Vinland for at least the ensuing decade. In spite of North America’s more bountiful resources, the Viking settlers remained in desolate Greenland. This was perhaps due to the violent encounters—including the slaying of Eriksson’s brother Thorwald–they had with the indigenous population of North America.

Archaeologists have unearthed evidence that supports the sagas’ stories of the Norse expeditions to America. In 1960, Norwegian explorer Helge Ingstad scoured the coasts of Labrador and Newfoundland for signs of a possible settlement, and he found it on the northernmost tip of Newfoundland at L’Anse aux Meadows. An international team of archaeologists that included Ingstad’s wife, Anne, excavated artifacts of Viking origin dating from around A.D. 1000, and the remains of the Norse village are now part of a UNESCO World Heritage site. 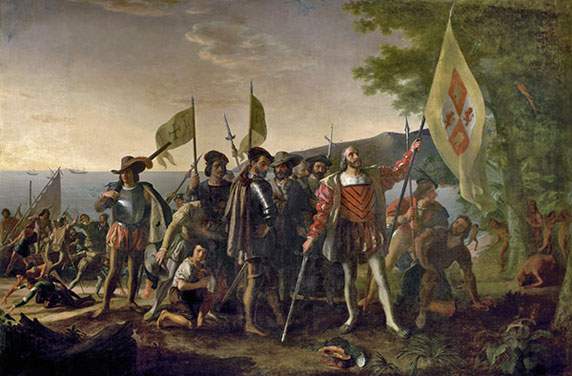 A painting depicts Christopher Columbus and his crew landing in the Americas. Columbus made trips to the Western Hemisphere in 1492, 1493, 1498, and 1502

While Columbus is honored with a federal holiday, the man considered to be the leader of the first European expedition to North America has not been totally forgotten on the calendar. In 1964, President Lyndon Johnson signed a proclamation that declared October 9 to be Lief Eriksson Day in honor of the Viking explorer, his crew and the country’s Nordic-American heritage. The proximity of the days honoring Eriksson and Columbus is coincidence. October 9 was chosen because it is the anniversary of the 1825 arrival in New York of the ship Restaruation, which carried the first organized band of Norwegian immigrants to the United States.

How then did Columbus gain credit over Eriksson ?

Roman Catholic organization called the Knights of Columbus and several Italian American groups began to lobby Congress to recognize Columbus Day. In 1907, the founder of Colorado’s first Italian newspaper helped establish the first official Columbus Day in his state, and within a few years, 15 states had adopted the holiday. By the time it became a federal holiday in 1971, most states already recognized Columbus Day.

Lief Erikson Day made its debut in the early 20th century too, but it never gained the same momentum. Though it’s been a national day of observance since 1954 (meaning the president issues a proclamation about it), many people don’t even know about Lief Erikson Day.

Columbus’s “victory” over Erikson is partly due to early lobbying by Italian Americans; but it’s also because, even if he wasn’t the first, Columbus arguably played a greater role in European migration to America.