WAS THOMAS EDISON THE 1ST TO INVENT THE LIGHT BULB?

WAS THOMAS EDISON THE 1ST TO INVENT THE LIGHT BULB? 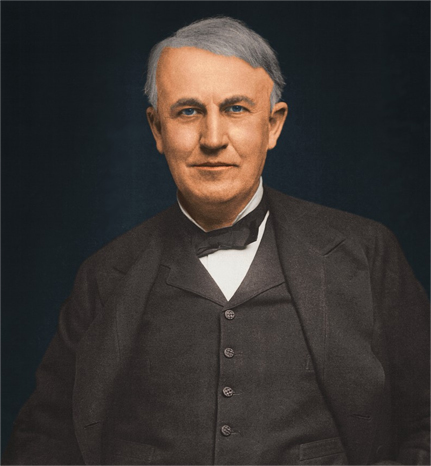 The invention of the lightbulb (specifically the incandescent bulb) is a rather contentious issue, to say the least. Whilst Thomas Alva Edison often gets all the credit, this is far from true.

Like many inventions throughout history, the modern lightbulb is essentially a combination of many tiny steps. Many historians claim that no less than 20 inventors had produced various designs of incandescent lightbulb long before Edison.

Thomas Edison's contribution to the lightbulb's evolution was the production of the first commercially practical one. As his design was so successful it effectively dominated the market and outstripped all other versions.

In 1850, another British inventor, Joseph Wilson Swan, a chemist experimented in the 1850s and 60s with carbon filaments. His early efforts failed however, because the vacuum pumps of those years could not remove enough air from the lamps. To countenance the problems de la Rue experienced, Swan decided to experiment with less expensive filament materials. He finally settled on using carbonized paper to replace platinum which showed some promise.

By 1860 he had a working prototype, but the lack of a good vacuum and an adequate supply of electricity resulted in a bulb whose longevity was much too short to be considered an effective producer of light. 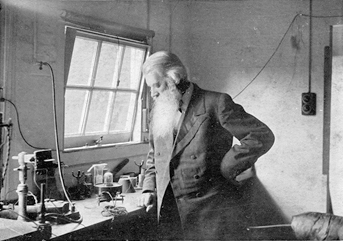 It also tended to blacken, or soot, the inside of the vacuum tube which was less than ideal (as you can see in the image below). 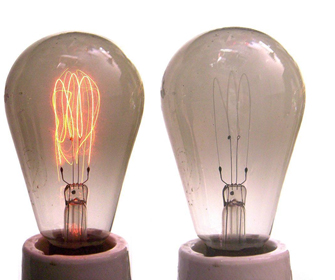 By the mid-1870s better pumps became available, and Swan returned to his experiments. By late 1878, Swan reported success to the Newcastle Chemical Society and in February 1879 demonstrated a working lamp in a lecture in Newcastle. His lamps contained the major elements seen in Edison's lamps that October: an enclosed glass bulb from which all air had been removed, platinum lead wires, and a light-emitting element made from carbon. Like its predecessors, it used a filament contained within an evacuated tube except he replaced carbonized paper with cotton thread.

The culmination of all his work was his 1878 development of a long-lasting light bulb. He patented his design in 1879 and would later come into direct conflict with Thomas Edison.

Public plaque commemorating Swan as the inventor of the incandescent electric light bulb, located in Newcastle upon Tyne, where Swan first demonstrated his bulb in 1878.

How then did Edison gain credit over Joseph Swan ?

In 1879, the same year Swan filed and was awarded his patent in England, Thomas Edison decided to turn his attention to the development of electric light bulbs. Edison, ever the keen businessman, wanted to develop a commercially viable and practical version to bring to market.

He hoped to muscle in on the lucrative gas and oil lighting market in the United States. If he could break the hegemony of these two systems, he might just be able to make a fortune. In October of 1879, he finally patented his first application for an "Improvement in Electric Lights" with the patent office. But he didn't stop there.

Edison continued to work on and refine his designs. He experimented with different n 1879, Edison filed another patent for an electric lamp that used "a carbon filament or strip coiled and connected ... to platina contact wires." This solution sounds very similar to that of Joseph Swan almost 20 years prior.

This patent also described the possible means of created said carbon filament. These included the use of "cotton or linen thread, wood splints, and papers coiled in various ways."

Just a few months after his later patent, Edison and his team were able to discover that carbonized bamboo did the trick. This material appeared to be able to last for well over 1200 hours.

Impressive, but all was not plain sailing.

So similar was Edison's own invention that Swan decided to sue Edison for copyright infringement. The courts in Swan’s native Britain backed Swan’s claim to the bulb, allowing Edison to sell bulbs there only if he joined forces with Swan. And while Edison’s thinner rod made the difference at first, it was soon Swan’s cellulose rod that truly won the day and became the industry standard that would bring light to the world.

British courts ruled against Edison and as punishment Edison had to make Swan a partner in his electric company.

In 1883 the Edison & Swan United Electric Light Company was established. Known commonly as "Ediswan" the company sold lamps made with a cellulose filament that Swan had invented in 1881. Variations of the cellulose filament became an industry standard, except with the Edison Company. Edison continued using bamboo filaments until the 1892 merger that created General Electric -- and that company then shifted to cellulose.

Later, even the U.S. Patent Office decided in 1883 that Edison’s patent was invalid, as it also duplicated the work of another American inventor. But, despite all this, Edison would forever be remembered as the inventor of the light bulb.

Thomas Edison would go on to become one of the most prolific inventors and businessman of the 19th and 20th Century. By the time of his death, he had acquired a mind-boggling 2,332 patents with 389 alone for electric lighting and power.